If you can craft the right copy that hits a home run in the minds of your clients and or customers, you've found the one thing that can bring them out of obscurity into the spotlight of fame.

And I can show you how to get it with my collection of 273 blockbuster Radio Ads Collection.

Steal my best radio ads in transcript form for a one time $297.

Back in 2017, I had plans to promote a product with an expert who made millions in radio marketing, and life got in the way.

I paid an assistant over $1000 to compile, type out and organize this blockbuster collection from top radio station markets here in the US.

You get each radio ad typed out in a word document.

And, better yet you get two separate cheat sheets.

First, you get all 273 unique radio attention openings, and secondly, you get the list of 273 radio call to action.

Each ad is uniquely original and can be modified to fit just about any offer.

What in tarnation are you waiting for?

These radio ads won't make you more money without YOUR action!

ERE IS WHAT YOU GET


1) These radio ads will become a true treasure trove of story ideas for years to come. Just some of the ad categories include . . .

I didn’t stop with the call to actions additional you’re going to have typed out over 273 of the radio headlines. Think about it. The radio announcer hast to get the attention of his listener and that’s why they’re paid the big bucks to design radio ads that stop people in their tracks even while driving or multitasking at their computer these headlines are some of the best I’ve ever seen or heard uses headlines for your emails, your sales letters, and any communication to grab attention of your prospect. Getting the attention of the people you want to convert is the hardest thing to do in today’s economy you’ll need headlines that stop people in their track. These radio ads will help you do that.

How To Become An Icon In Advertising

Lon Dorsey has been a force in radio and advertising since the 1970s, working with huge names like W.W. Caruth Jr., the Dallas Tornadoes, and Larry Holmes. He’s produced his own radio shows, opened an advertising firm, and started his own newspapers and magazines.
The guy knows just about all avenues of advertising and how to make money at it.

And in this audio, you’ll hear all about his amazing journey, along with the lessons, regrets, and advice he’s picked up along the way.

* The one thing you need to focus on if you want to sell anything in life: People, because advertising is a game of influencing them, here’s how to do it

* A little story that illustrates how to take a negative and spin it into success: While working for the Dallas Tornadoes, Lon had to sell tickets on the sunny side of the stadium. He soon had big-name CEOs sitting in those spots wearing sunglasses and looking cool and everyone wanted the seats – here’s how he did it

* Exactly what Lon did when the free soccer magazine he started for the Tornadoes wasn’t allowed in the stadium anymore because it competed with the one put out by the North American Soccer League – with one simple idea, he made it even more profitable for his advertisers.

* How Lon went from landing 20-dollar spots in his early days in magazine advertising to landing the $1500 ones – just by changing his mindset, and watching what his coworker with the fancier clothes did

* The biggest mistake Lon made in his career (he says he blew it when he had a spot lined up on Johnny Carson but they wanted Mohammed Ali and not Larry Holmes). Here’s what happened and what he should’ve done instead. Lon says whatever you do in business, if it becomes a part of you and not the other way around, you’ll be well on your way to becoming an icon. But you have to believe in yourself and trust that you’re going to make it.

* A step-by-step look at what syndicating a show is like: what it means, the different ways it can happen (a syndicator might approach you, the general manager of the station might, or you can do it yourself), and when to go each route

* Examples of how to know when your show is ready for syndi cation: Lon says you want people to say you’re a national show on a local basis – here’s what that means along with the other things people are looking for when considering whether or not to syndicate

* A shocking breakdown of the hour you buy from the station: believe it or not, the station takes some time back, then you need to allot minutes for advertising and intro music – here’s how many minutes you’re actually filling with a show

* The single, crucial key to a great interview: Make the guest look smarter than they are – here’s how to do that

* A word-for-word script of what to say when you first walk into a station to talk about a new show – you might think you want to talk to the general manager. You really want to ask for this a program director – here’s what to say

* Everything you need to know to produce a commercial for a client: From finding out what they need to do with it to tips for making it funny and informative

* Lon’s simple, three-second trick for keeping a show running on time even when a guest seems to want to go on and on forever

* What an account executive is, why you need one, and how they get paid

* Secrets to landing celebrities (Do a public service announcement) – and the unbelievable story of the commercial Lon did with the Dallas Cowboys to help a little girl with liver problems. Once you hear it, you’ll understand why it’s one of Lon’s proudest achievements

* Why it’s absolutely critical not to act like you know everything at a radio station. Listen more than you talk and don’t be afraid to ask questions

* One of Lon’s biggest regrets: Not syndicating sooner – here’s why

Lon says it doesn’t matter what station you walk into.

It’s going to be like a big group of friends. In other words, you can’t walk in there with anything but one goal in mind when you first meet them: to become one of their friends.

And in this audio, you’ll hear how to do that along with the many tips and advice becoming your own radio show and advertising expert.

Own all six parts to this interview in both PDF transcript form and mp3 downloadable files when you order the 274 Block Buster Radio Ad Collection. Click here to order

Public Relations expert the PR Prodigy has worked with the greats – Jay Conrad Levinson, Chet Holmes, Jay Abraham, Les Brown… the list goes on and on. And it’s little wonder.

He says when it comes to radio publicity you’ve got to be like “the house” in Vegas and stack the odds in your favor. In other words, stop guessing at PR when you can use strategies that make results mathematically yours. And in this two part audio interview, you’ll hear how to get them.

He uses reverse-engineering in his public relations business. Basically, that means you should stop sending out formal press releases that beg the media to run your story.

He say’s “Find out what kinds of stories your media is running first, then figure out how to fit in.”

It’s a new way to look at publicity that’s easier, smarter, and more effective. And in this two-part interview, Robert walks you through it all.

Part One: The 3 Easy Ways To Sell Yourself For Free

If you’ve never been on TV before, the PR Prodigy says you’re missing out. It’s not only fun but it also bumps up your credibility instantly because if CNBC thinks you’re an expert, you’re an expert.

The best part about that kind of publicity is… it’s free, and could mean thousands in quick profits. And Robert says it’s easier than you think to get in a magazine, newspaper or on a show too.

But that’s just one of the three ways you can sell yourself for free. And in Part One of this audio, you’ll get a step-by-step look at all three. You’ll also hear…

* All about the JV that changed the PR Prodigy’s life (and the guy didn’t even get his name right!) – how he landed it, what terms he negotiated, how much he made, etc.

* The fastest-known way to be on a national talk show (or in a magazine, newspaper, radio show) and tell millions of people about your business for free

* The "no-sweat, no-brainer" PR techniques you’ll want to use for every seminar… or book release, movie opening, product launch, etc.

* The art of co-op mailing – if you run yours like the PR Prodigy does, you can send your next mailing out for free (or maybe even for profit)

The PR Prodigy didn’t learn public relations in college, which is probably why his techniques aren’t bogged down with theory. He learned PR right in the trenches – first, creating it for his own company then expanding it to help others.

He saw the power Jay Abraham was creating with his reverse-engineering techniques, and he applied them to PR for amazing results… that are always stacked in his favor. And in this audio, you’ll hear how you can get those kinds of results too.

Own both parts to this interview in both PDF transcript form and mp3 downloadable files when you order your 274 Block Buster Radio Ad Collection.

ERE IS WHAT YOU GET

Once you are in the download page part of your order, you will get a link to a zip file that you will download to your desktop computer or laptop. Once you open the file you will see ALL the radio ads each typed out in ms word files. 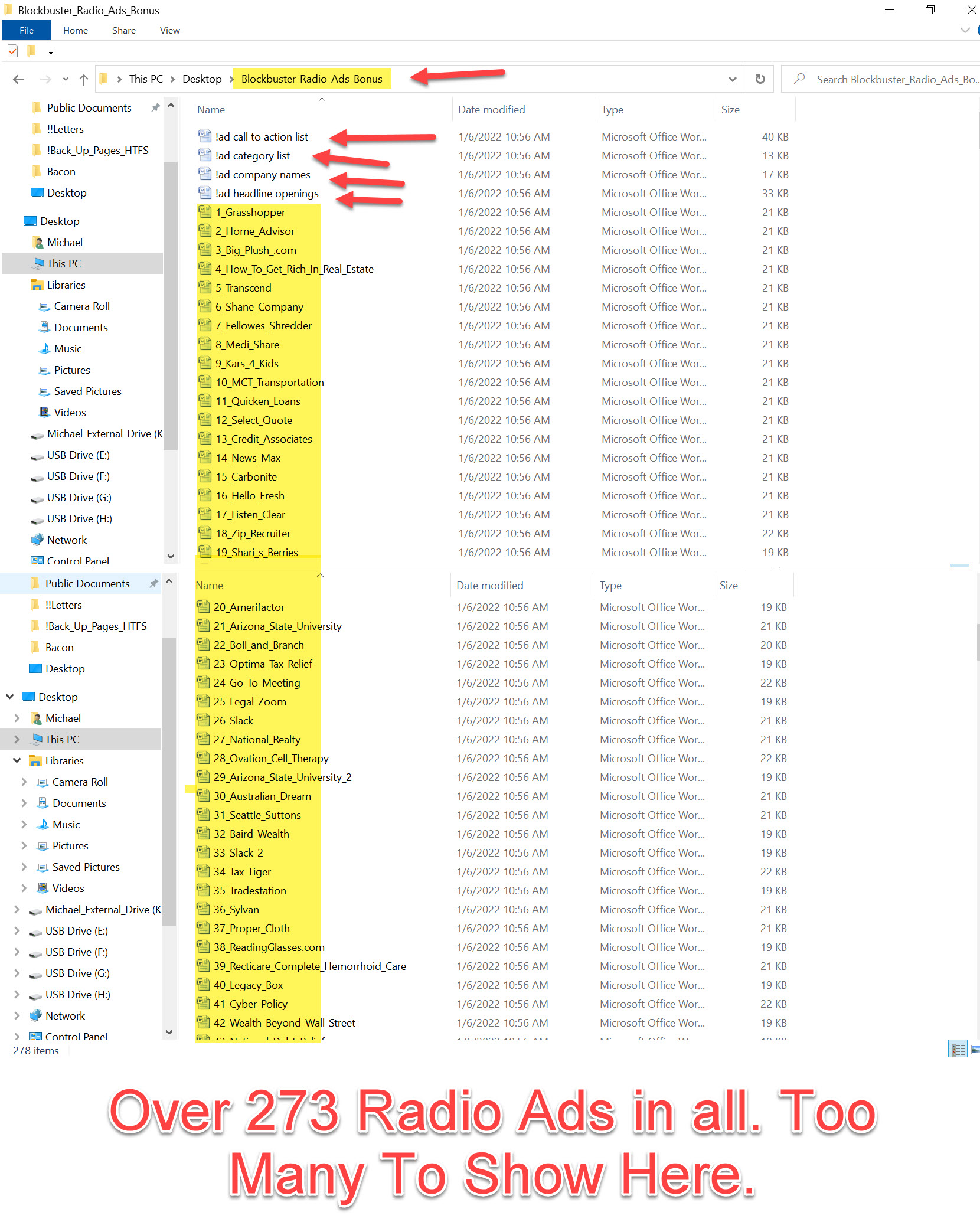 HERE'S WHAT MY RADIO AD COLLECTION WILL DO FOR YOU

Download, and scan the transcripts to your 273 radio ad collection.  Then, study and use them as a way to short cut your way to generating story ideas, opening headlines and call to actions.  This radio swipe file is something so brain-dead simple to use. And having and using it is something so fundamentally aligned with everything about writing, that it’s something that will never NOT work.  And now you get this entire collection for only $297 without any ongoing payments.   What are you waiting for?

The second you place your order, PayPal will re-direct you to a page with a blue button that when clicked will take you to your Radio Ad download Page.

Whether you order from your phone or desktop computer, you should see the image below with the blue or white "Return To Merchant" button.

If it does not work, as a backup, I will also send you the links by e-mail to the PayPal e-mail address you used when you ordered.

Either way, only seconds from the time you order, you will have a direct link to your downloads.

PS. I've never offered this collection to any of my subscribers until now. And it's not included with ANY of my products and only has been offered with a joint venture promo for Bill's Story Sales Machine buyers.

So, know you are getting something exclusive that no one else has, and I would bet my left ear, it will be THE perfect complement to any of your marketing or copywriting efforts.

Most marketers overlook the power of radio advertisements. Good-quality radio ad copy is some of the best story copy you can own. And the opening headlines and call to actions, oh my! You need this collection if you have one once of desire to better your advertising efforts. 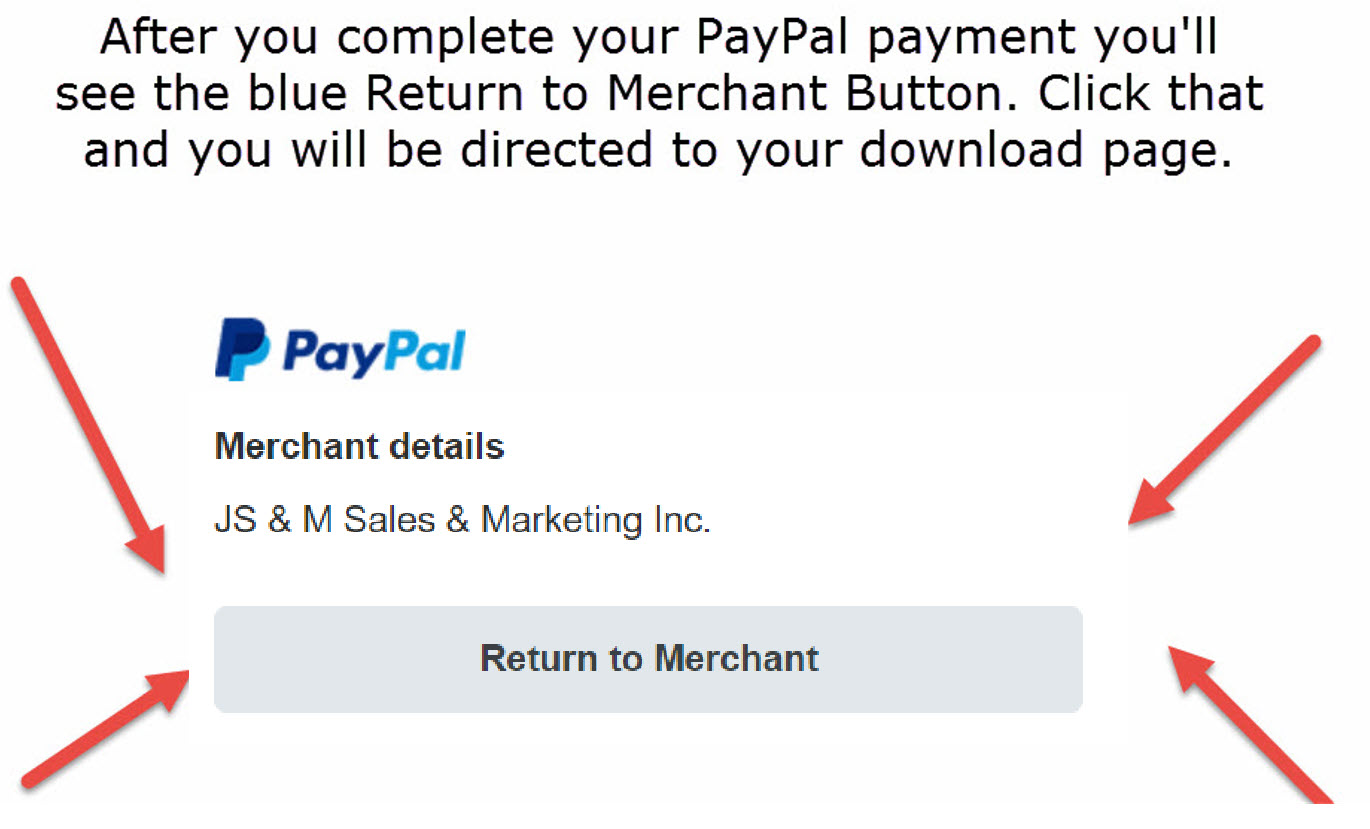